45 Minutes in a Powered Glider 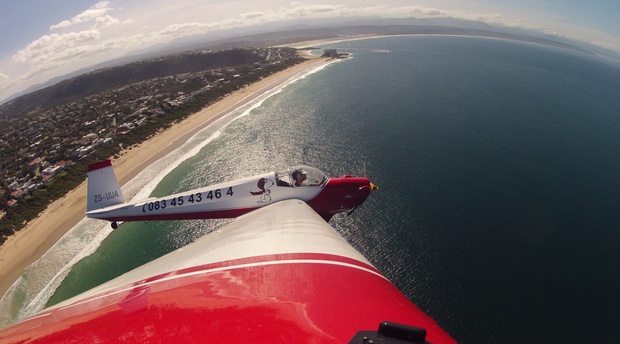 I'm an overweight man of 75 years and wheelchair bound as a result of a neck injury I sustained when much younger. Ever since I was a kid and new what an aeroplane was, I've been crazy about flying. However because of my disability. I've never been able to do much about this until I met Stewart in Plet in 2012.

We spoke about flying and about the purest form of flight, gliding. Stewart had a small powered glider and offered to take me for a flight. I've never been more excited or more scared but I couldn't give up this opportunity to fulfill the first item on my bucket list. I told him I was dead keen to go but how was he going to get me into the cockpit of that oversized model aeroplane! He was totally unfazed by my query and said with a little help from his friends it wouldn't be too difficult and that I should be ready to go the next day if weather permitted.

The next morning was a little cloudy and cool so we decided to wait until the afternoon. We got to the airport in Plet at around 3pm and Stewart together with his friend Bill and one of the ground staff did the impossible. They first got me sitting on the leading edge of the wing. From this position they got behind me and lifted me up (all 100 kgs) until I was in a standing position. This was a real feat as one could only stand on certain parts of the wing or one's foot would go through the wing and all would come to a sudden end. They then slowly fed me into the right side of the cockpit making sure my legs were correctly placed not to be in the way of any of the planes control pedals. At last I was in position with my safety belt all buckled up.

Stewart then got into the left side of the cockpit and began to go through his elaborate check list telling me what he was doing each time. Eventually he started the engine and started taxiing along the tarred roads leading onto the runway. He positioned the plane at the one end facing into the breeze and looked at me with that "it's too late now" look and opened the throttle. The plane gathered speed and before we were halfway down the runway we were airborne.

We climbed gradually and once high enough, Stewart made a gradual left turn until we were over the beach and sea. We flew at a moderate hight aiming at the "gap" in the Robberg which we flew through looking at the Robberg on both our right and our left. Stewart turned the plane around and flew over the Robberg and parallel to Robberg beach at what seemed to me to be just above the waves. Before reaching the Beacon Island Hotel we climbed and made a large 360 degree turn. While doing this Stewart asked me to look down the leading edge of one wing and then follow that line to the water below. I couldn't believe my eyes. At the centre of the circle and just below the surface of the sea was a great white shark! No one could miss it.
On thinking back, I realised that Stewart did not have to think at all on how to fly the aircraft. Every turn or change in altitude was even and smooth even more so than driving a car. We would keep up a running conversation while the plane was being expertly flown. This can only come from years and years of flying in many different aircraft.

We flew all the way to Nature's Valley and back past the airport and runway before Stewart turned the plane around to face into the wind again. Stewart then turned of the motor and we started gliding. In order to remain in total control you need a certain airspeed and just before gliding in to land, Stewart did a gentle dive aiming for the start of the runway. As we approached he gradually leveled off and opened the air brakes. The plane came in perfectly on the one wheel it has under body. As we slowed to a stop the right wing dipped and was supported by the small wheel under the wing.
The rest of my day was my perfect dream!